What is an Open Letter
Periodically the Chamber publishes open letters to political leaders in order to make a public appeal or protest. These published letters are intended to be read by a wide audience and therefore widely distributed to the public through newspapers , social media outlets, and the business community.


​
RE: Fighting  for Free Enterprise and Supporting Small Business ​


To: All elected officials at the federal, state, and local levels

​This year will represent countless opportunities to support small businesses and entrepreneurs everywhere! As elected officials, the responsibility that comes with your position can not be understated, and we call on you to be vigilant in protecting free enterprise and our small business community.

The six cities in our Region (El Mirage, Sun City, Sun City West, Surprise, Waddell, and Youngtown) continue to experience uneven economic recovery, and countless businesses are still struggling to remain open. The Surprise Regional Chamber of Commerce and the small business community stand ready to help, we are resilient, and our elected leaders at all levels must take to bold steps to support a pro-business agenda that supports the entire business community!

The means restoring good governance, focusing on things that help businesses, and not bring back excessive regulations, ordinances, and taxes. Supporting a pro-business climate includes creating jobs, the equitable distribution of transportation tax dollars in Arizona, building our infrastructure, liability protections for businesses related to COVID-19, and fully funding local and state economic development entities/departments as outlined in our legislative agendas.

We look forward to working with you, as well as our 5,000+ businesses in the NW Valley! This year will provide new opportunities for the business community, and we need your help to do everything possible to unleash a robust economic recovery.

We look forward to endorsing candidates based on their commitment to the free enterprise system.


Surprise Regional Chamber of Commerce
The Voice of the Business Community
​

Responses to the Chamber's Open Letter

_______________________
​As the Senator for District 21, I, and my other legislators in our district, have and will continue to fully support small businesses because they are the backbone of our economy. Our past voting records will also show that the commitment we have is not only in words but in votes. You can count on our support.

Thanks for all your work. 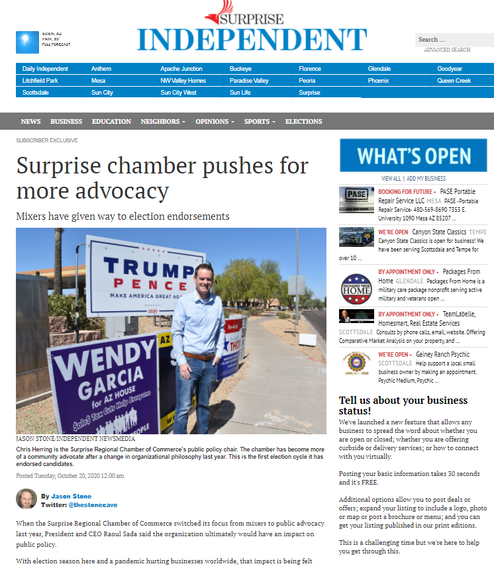 ​When the Surprise Regional Chamber of Commerce switched its focus from mixers to public advocacy last year, President and CEO Raoul Sada said the organization ultimately would have an impact on public policy.

With election season here and a pandemic hurting businesses worldwide, that impact is being felt more than ever.

Just ask state Sen. Rick Gray, who serves District 21, which covers Surprise. After the chamber sent out its first “action alerts” earlier this year, Mr. Gray said he soon received 300 emails about it.

He told the chamber, “That got my attention.”

That’s exactly what the chamber, which serves the business communities of Surprise, El Mirage, Sun City, Sun City West, Waddell and Youngtown, was hoping for when it switched its focus last year.

The chamber recently unveiled its Legislative Action Center program as a way for businesses to quickly send messages to elected officials. Chamber alerts are blasted to its members on text and email and usually contain a link to allow stakeholders to let their opinions be known. “If it’s a local city issue, we can get that message out to the council members and the appropriate staff that is advising,” said Chris Herring, the public policy chair for the chamber.

The system is something that larger national or statewide organizations are already using, but Mr. Herring said it’s “pretty unique” for a chamber the size of Surprise’s.

Bill Vensel, the chamber’s board chairman, said the messages to area leaders have had a “lasting impact” on federal, statewide and local matters.

“It needs to be close to real time because you know how fast things move at the legislative level,” Mr. Herring said. “They know now that the chamber is involved, the chamber is watching and that their members are definitely watching now, so they do respond.”

The simple matter is elected officials are aware that chamber members are also voters in their districts.

Mr. Gray, who is an ex-officio chamber member, said it makes a difference to him to hear firsthand from businesses about what is important to them.

Election selection
As part of its advocacy push, the chamber changed the way it handles elections, too.

Mr. Sada said this election cycle is the first where the Surprise chamber has made endorsements.

The chamber endorsed three state senators, all Republicans, for the Nov. 3 election: Rick Gray in District 21, David Livingston in District 22 and Sine Kerr in District 13.

For the State House of Representatives, the chamber endorsed five other Republicans in its service area. Those include Tim Dunn (District 13), Joanne Osborne (13), Kevin Payne (21), Frank Carroll (22) and Ben Toma (22).

The chamber stayed out of endorsing candidates in the August primary for the Surprise City Council. Instead, it held a series of forums for each district to give voters a chance to see the candidates “together,” albeit socially distanced from home.

“We want to give the public access to information,” Mr. Herring said. “We thought that was a good service to the community, but we didn’t feel the need on this election cycle to endorse at that level.”

Of the two big propositions on this year’s ballot, 207 and 208, the chamber opposes both, although only one officially.

Prop. 207 is an effort to legalize recreational use of marijuana in Arizona. Mr. Herring said the chamber officially opposes any law to legalize marijuana, especially through the initiative process and not through the state Legislature.

The chamber sent out one of its action alerts Oct. 15 signifying its opposition to the “Smart and Safe Arizona Act.”

It hasn’t officially taken a stance on opposing Prop. 208, the Invest In Ed proposition, but it’s clear business leaders aren’t happy about that one.

“A lot of small business owners are not taxed as corporations,” Mr. Herring said.

“You on paper may be making a lot of money, but you may not be taking hardly any of that home.”

Mr. Herring said the tax that Prop. 208 would enact would unfairly target the wrong people.

“They’re not small business owners there that are living in 5,000-square-foot McMansions,”  Mr. Herring said. “They’re small business owners living in 1,500-square-foot houses with two and three kids in school and they’re driving a 10-year-old Hyundai. On paper they make a lot of money, but the majority of that money is actually in their business.”

Mr. Herring said the tax increase would have a negative impact on Surprise small businesses.

“A single mom of three running a small business right now, the last thing that they need is a massive tax increase,” Mr. Herring said.
“What’s going to happen is they’re either going to close down or they’re going to lay off staff.”

In one of its action alerts, chamber officials said they favor keeping the tax in place to “protect our quality of life, train our future workforce, and attract high-paying jobs.”

Growing pains
Mr. Herring said the change the chamber’s overall philosophy hasn’t been smooth for all of its members.

“I think change is always difficult,” Mr. Herring said. “Often times when you make a change, people need time to adjust. Even internally as a board and an organization we’re taking the time to adjust and to figure out what the right program mix is.”

Mr. Herring called it a “hard pivot” into the new strategy.

“It’s proven to be the right strategy especially, given the nature of how we’re operating in the business world with the pandemic,” Mr. Herring said.  “If we were still focused on breakfast mixers once a month, we really wouldn’t be doing much right now. But when you’re focused on policy and action, you can keep going.”

If anything, Mr. Herring believes chambers all over the country are more relevant than ever as businesses try to survive the COVID-19 pandemic.

“Business policy has been at the forefront of everybody’s mind all year,” Mr. Herring said. “Whether it be the PPP loans, whether it be additional stimulus, whether it be emergency orders that shut down businesses. We have been very relevant to our members.”

In place of the mixers and other networking events, the chamber has focused on virtual events to inform the public. That included a business roundtable with Rep. Debbie Lesko earlier this month.

“We’re still trying to figure out how much of those networking activities are strictly for networking purposes,” Mr Herring said. “I think we’re going to still keep making changes because they want to be responsible members. And I think there are members that still want to see that.”